×
Go to content
At the age of 23, Kurt Olbrich became a master of the model and tooling trades. With these qualifications, he started to work with plastic technology, which was in its beginnings at the time. His work with plastics allowed him to advance his career with  to head their applied research department. After 20 years with Hoechst, he decided to become self-employed in 1972 in the field of Basic Research and later in 1973/74 as a German state certified consultancy expert.
As he could not achieve the results he required with the existing light microscope technology, he started to develop his own series of microscopes with enhanced features. He made detailed research into the reasons why the resolution and depth of field, of existing light microscopes, is so limited. His research led to his discoverery of a unique new way of building microscopes which no longer suffered the constraints of existing optical therory.
In 1976, Kurk Olbrich founded the "Institute for Interdisciplinary Basic Reseach" and developed a number of new Ergonom microscopes in order to back up his consultancy work. Based in Mossatal-Hiltersklingen, a small town in the Oden forrest (Odenwald) north east of Heidelberg in Germany, he provided technical and scientific research services for a number of mainly German based companies, institutions and medical reseach labs.
He found that by using a different approach to optics and a new mathematical approach, he could build microscopes with a large "cylinder of sharpness" (depth of field) and a resolution better than 100nm, while maintaining full contour sharpness and true colors. Let us first look at the microscopes Kurt Olbrich has built over the years.
Kurt Olbrich's Motto was: 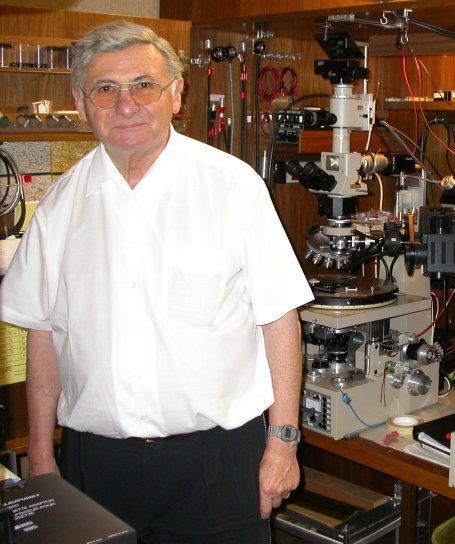 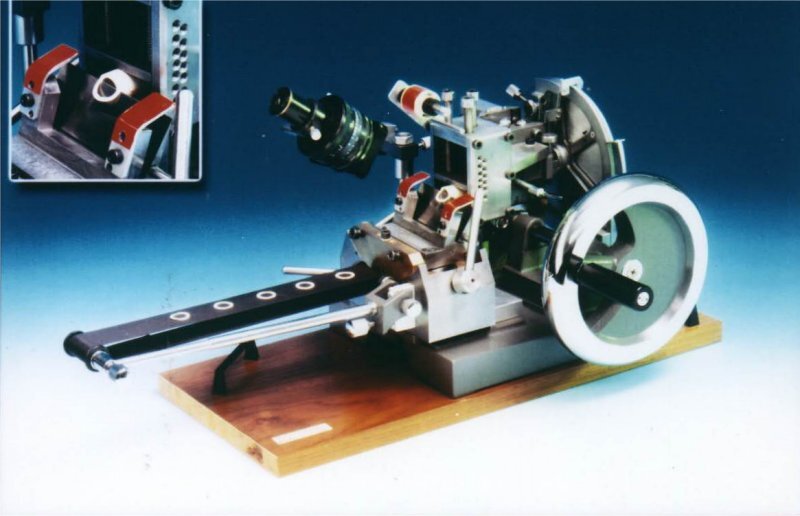 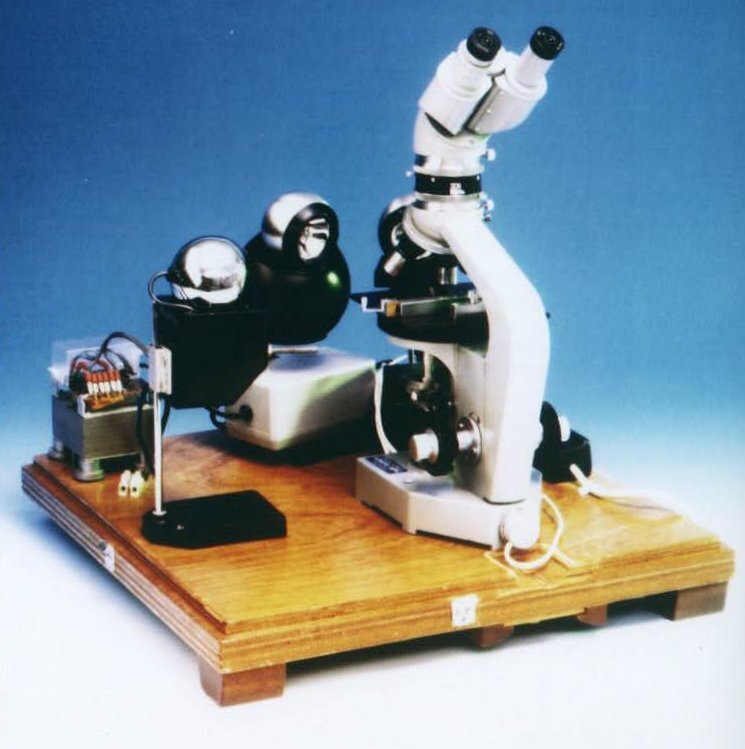 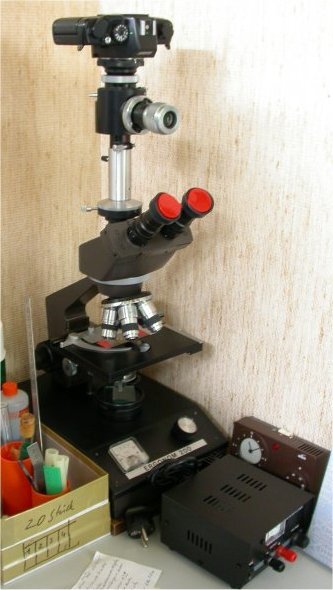 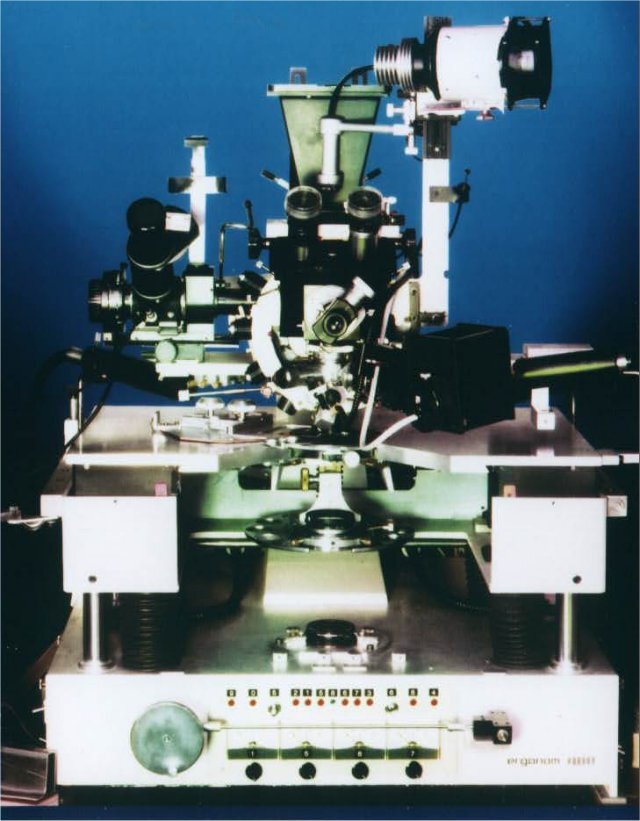 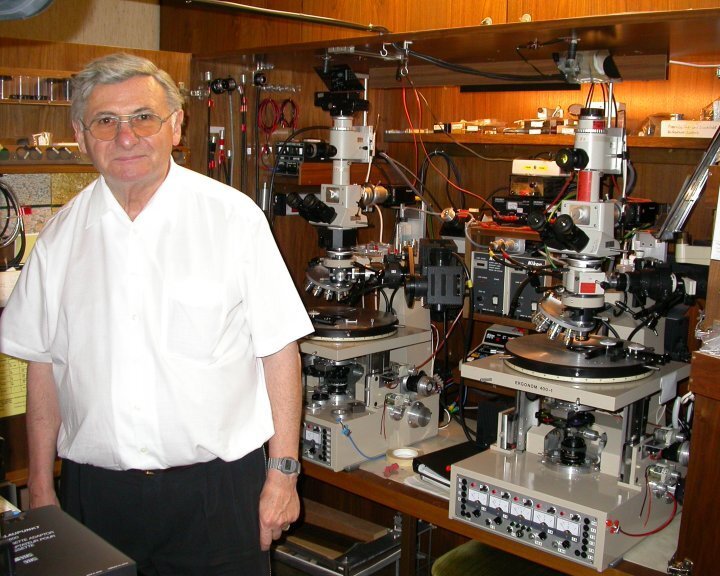 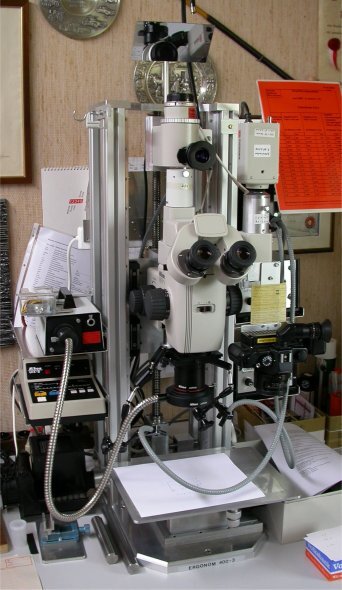 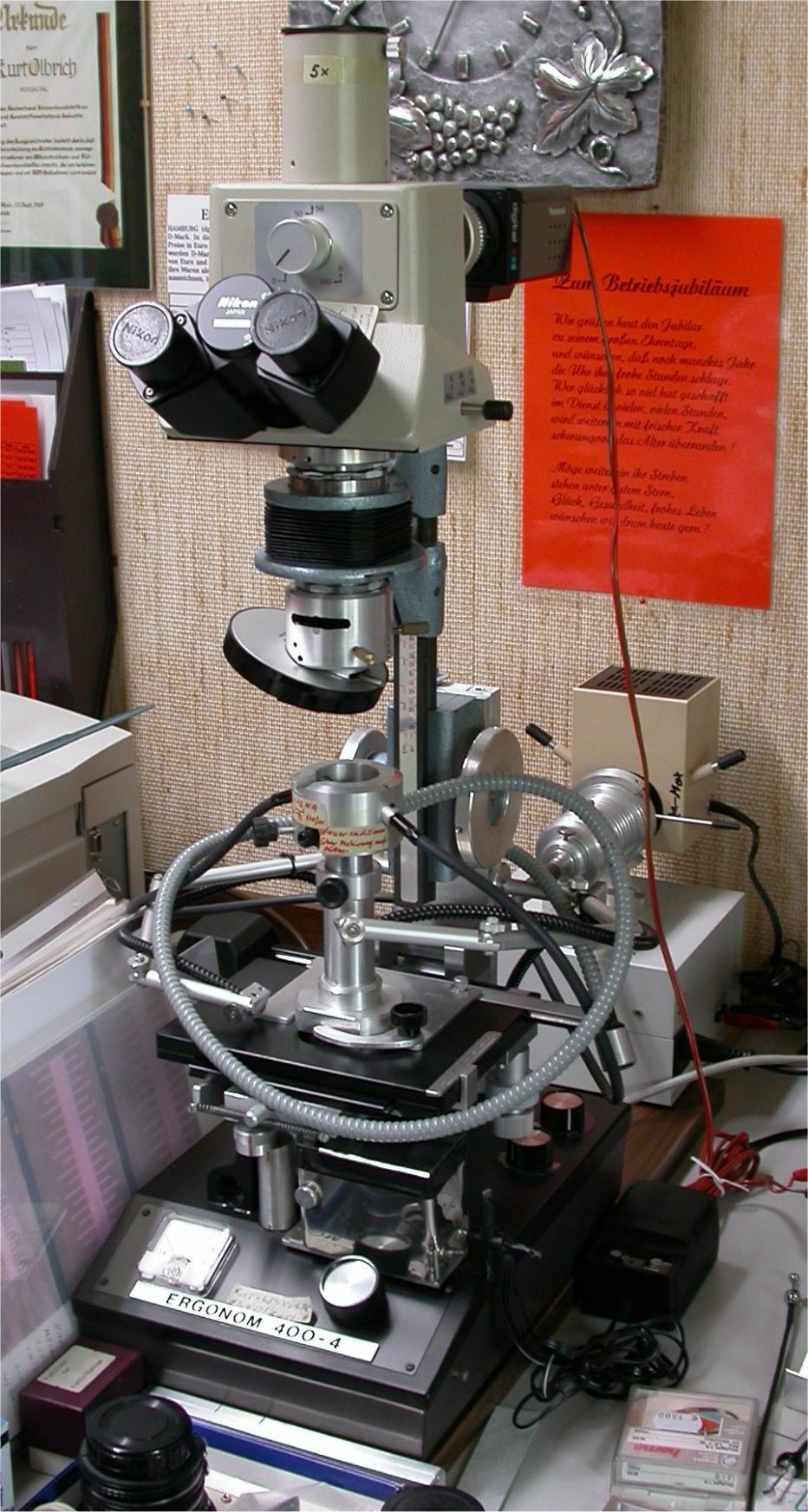 2002 - Built to be Sold to End-Users
These were the first microscopes to be offered by the newly formed Grayfield Optical, Inc. 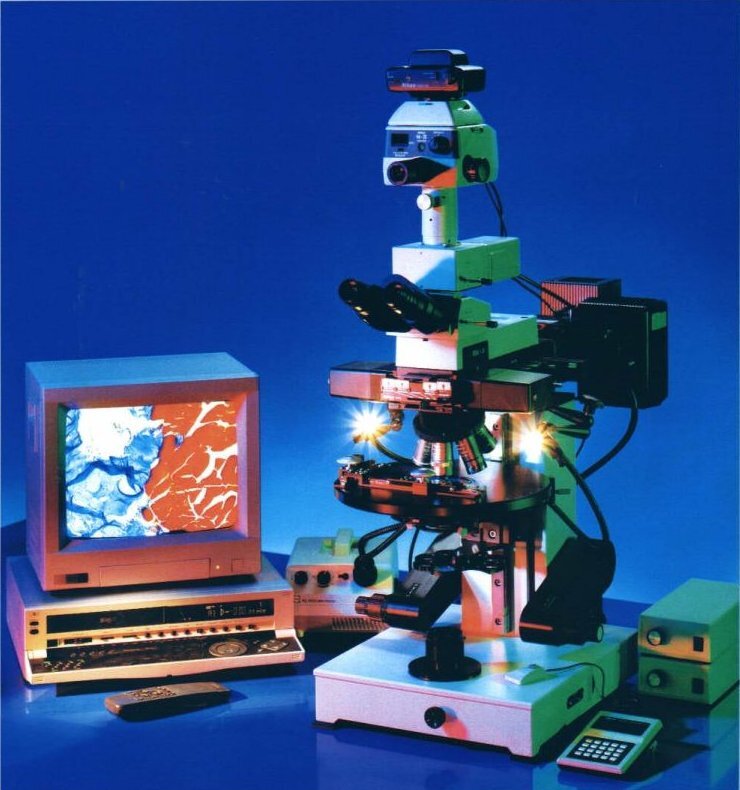 First Ergonom microscope built using infinite objectives and designed to be sold commercially. Due to high manufacturing costs, only one was made and was the prototype for the later Ergonom microscopes. It is still in use as the reference microscope in our Hamburg facilities for the new SeeNano Series to be released in 2022. 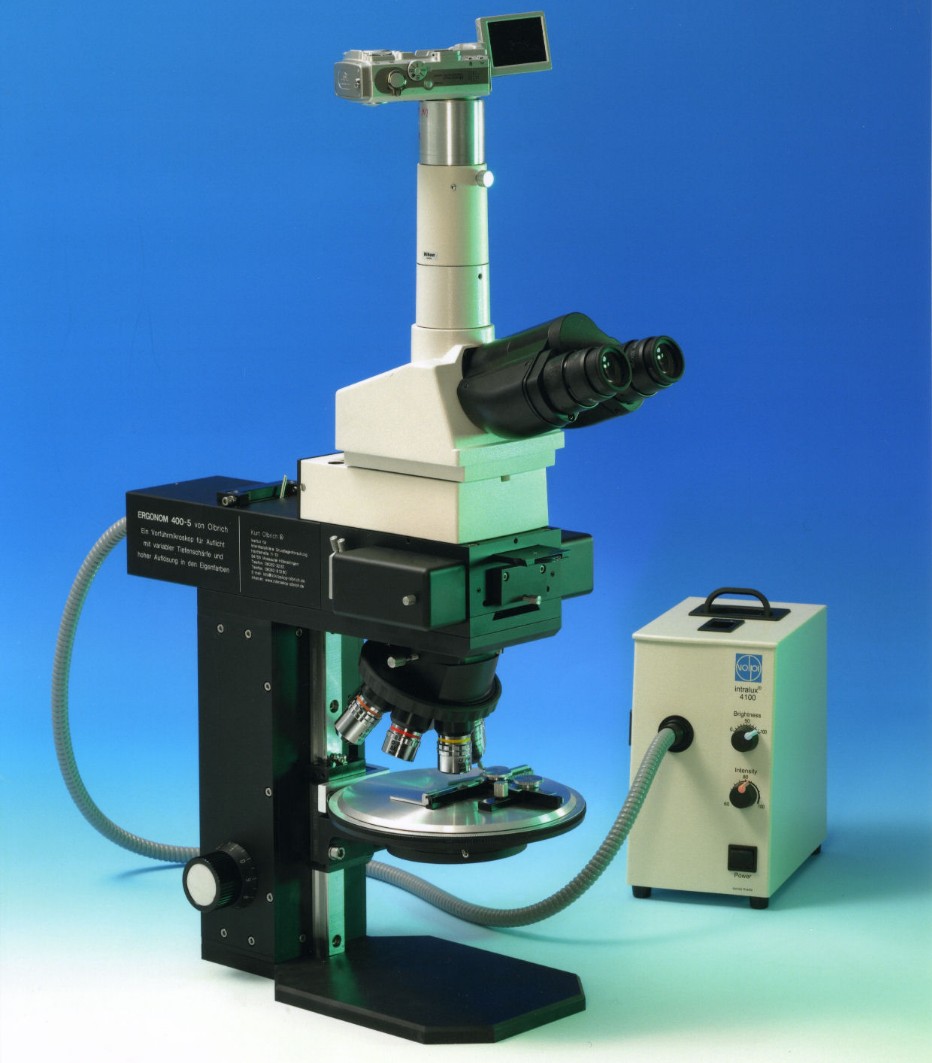 Ergonom microscope designed to be lower cost and portable while maintaining all the key features of the Ergonom 500. This has been demonstrated around the world including at Microscience in London. It was redesigned, upgraded and sold to a major University in the UK where it is in use for scientific research.
2004 - Portable Microscopes 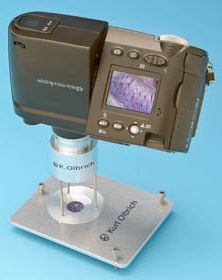 Click on the above image to see the product page with additional information and images.
Note: This microscope is no longer available. 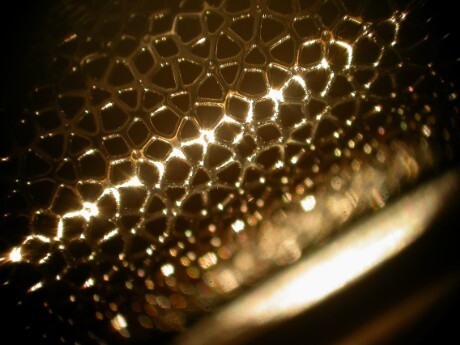 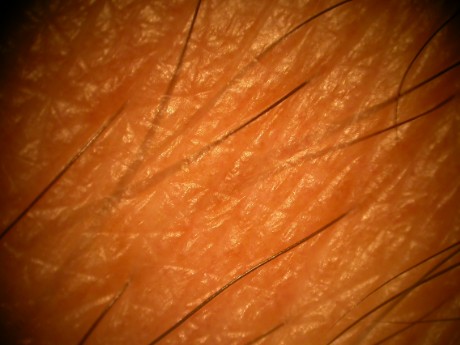 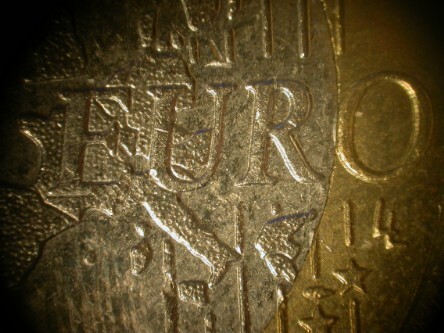 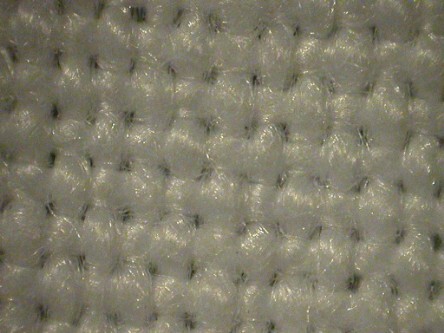 The portable microscope was sold in their hundreds, mainly to the automotive and paper industries. A major German car manufacturer bought hundreds of these microscopes to document metal and paint fatigue issues on site. This was much easier than sending the parts into the lab and the extended depth-of-field allowed them to image parts more easily. In the printing industry, special paper filters had to be used and quality control on site was vital to reduce costs through premature exchange. The portable microscope could quickly check these filters for flaws and document it at the same time.

Click on the above image to see the product page with additional information and images.
Note: This microscope is no longer available. 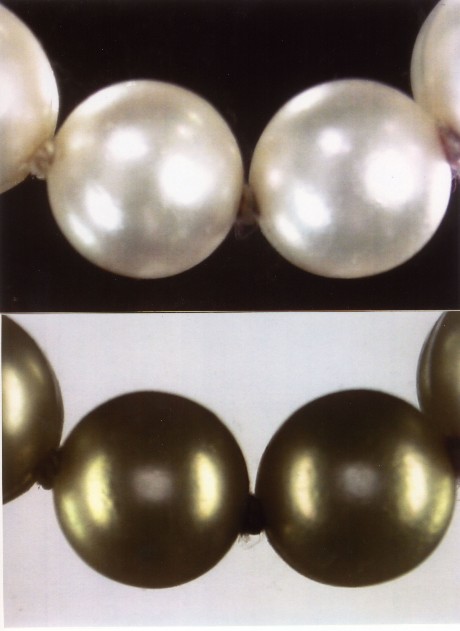 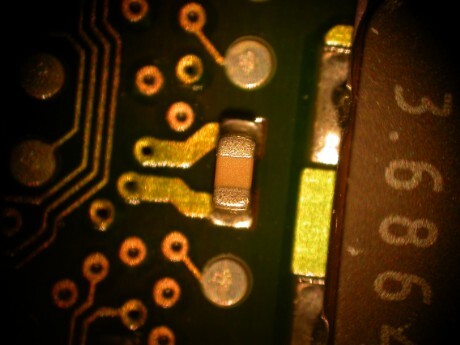 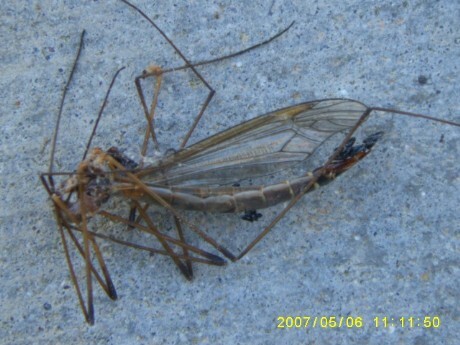 The 3D-Macro-Microscope was used whenever items were to be photographed with a large depth-of-field. With macro-photography, close-up images of items with a lot of depth often fail because the camera's lens has a very narrow depth-of-field. This system used the Olbrich-Lens-System to vastly expand the depth-of-field with normal cameras. You could zoom from close-up to overview, while maintaining the depth-of-field. Very useful for those imaging products for advertising, geology, insects, coins, jewelry (very useful for imaging diamonds), etc. Many of these were sold until Kurt retired.
2007-8 - Ergonom 3000/4000
By now, Kurt Olbrich's microscopes were well refined and very easy to use. If you know how to use a conventional microscope, using the Ergonom microscopes was easy. Just forget about oil immersion and staining, as that is not needed. You have to learn about one extra control, variable depth-of-field that is simply a lever which changes from zero, what you would get on any other optical microscope to "Extreme" which turned a flat tightly focused image into a contrast rich image with plenty of depth. Whereas conventional microscopes has just one focal point, the Olbrich Lens System has an infinite number of focal points, giving the image an incredible depth. The Ergonom 4000 and 3000 microscopes were designed to include and the advantages of his previous microscopes while optimising the components to reduce the unit cost. They were each made in three configurations: Universal ("U") that offered both incident and transmitted light options, Incident ("I") for incident light only usage, and Transmitted ("T") that was for transmitted light observations, only. 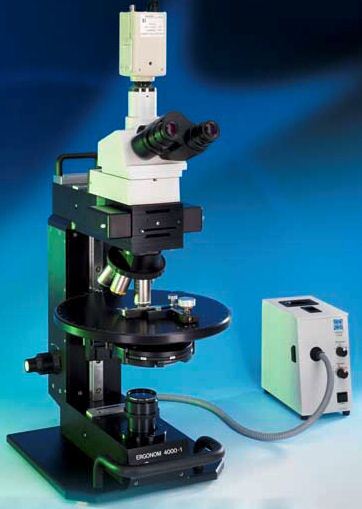 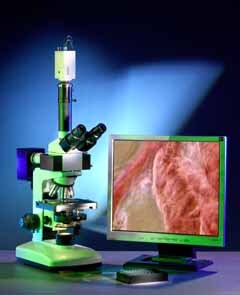 This was the lower-priced version of the 4000 microscope, using a commercially available framework. The aim was to produce a more affordable microscope that still had most features of the 4000, yet with lower priced materials. The microscope was smaller, the stage was simpler, the field-of-view was not as large, yet it still featured up to 200nm resolution, variable depth-of-field and full color contrast. Click on the above image to learn more about its capabilities. This microscope is no longer available, yet the abilities and more have been integrated into the new SeeNano Lab microscopes due for release during 2022. 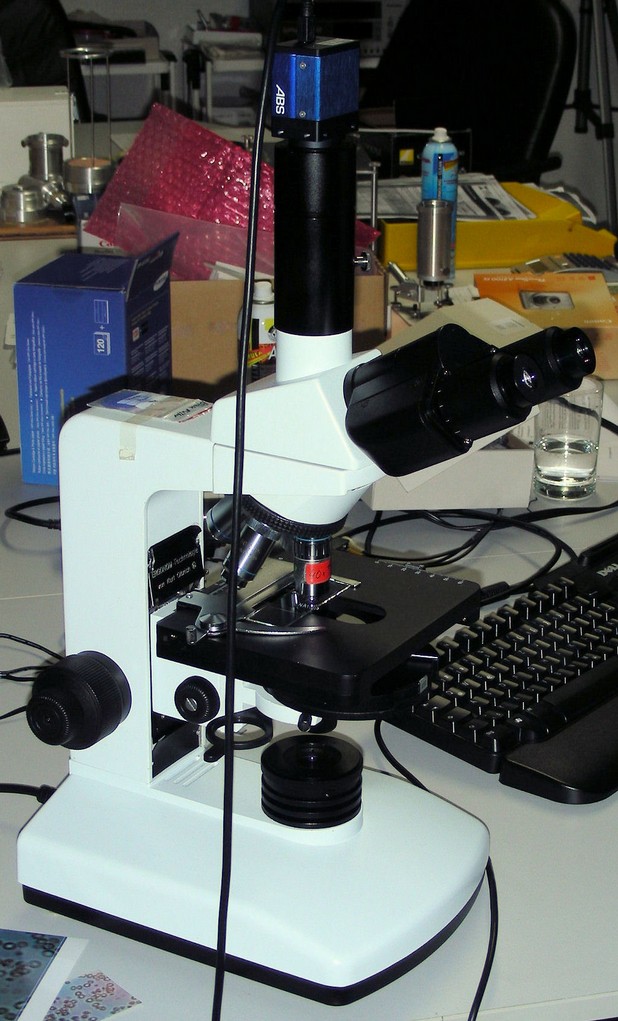 In October 2010, the Ergonom 3000 series was redesigned using more standardised components in order to significantly reduce the costs to affordable levels while maintaining quality. The new redesigned version was presented to the public at the European Medical Week Congress in Baden-Baden (Oct. 29-Nov. 3, 2010).
Marketing History

Up until 2002, Kurt Olbrich refused to sell his Ergonom microscopes commercially, preferring to provide a consultancy service mainly for the automotive, chemical, plastics and electronics industries along with some medical research work primarily with the University of Heidelberg. As Kurt Olbrich got older, he realised that he could not continue his consultancy work for ever. In 2002, he therefore developed a new marketable version of his Ergonom microscopes - the Ergonom 500. In contrast to his previous microscopes, the Ergonom 500 maintains the high quality imaging capabilities, including variable depth of field, full colour contrast, etc. of the Ergonom 400, while being much more compact and easier to use.

In order to market the Ergonom microscopes, Kurt Olbrich co-founded the Orthikon GmbH company for marketing primarily in German speaking countries as Kurt Olbrich does not speak English.
Grayfield Optical Inc was founded in September 2003 specifically for the marketing of Kurt Olbrich's range of microscopes to the rest of the world using the English language. Grayfield Optical Inc presented themselves for the first time publically at the Micro Science 2004 Exhibition in London and again at their 2006 and 2008 exhibitions. The Ergonom 400-5 was presented for the first time at a public exhibition in 2006. In 2004, two smaller microscopes were released for an entirely different market. The 3D Optical Macro-Microscope with 28mm DOF and the Portable Microscope with 4mm DOF (see our product pages for more details).
In 2006, the Ergonom 400-5 and 400-6 microscopes were released that have been further simplified in order to lower costs while maintaining the high resolution capabilities, etc. of the Ergonom 500.
In 2007, the Ergonom 4000 series was released as a commercial version of the Ergonom 500 microscope. This new series provides even similar resolution to the Ergonom 500, while being even easier to operate while reducing the manufacturing costs.
In August 2007, the Ergonom Lite microscope was released with 300nm resolution at a price much more affordable for larger clinics and hospitals, etc.
In May 2008, the Ergonom 3000 series replaced the "Lite microscope" with an optical resolution of up to 200nm, with the same depth of field, color contrast capabilities of the 4000 series, yet available at a quarter of its price. This microscope is ideal for medical work providing considerably better image capabilities that conventional darkfield microscopes at a price affordable to many larger practices and clinics.
In October 2010, the Ergonom 3000 series was redesigned using more standardised components in order to significantly reduce the costs to affordable levels while maintaining quality. The new redesigned version is to be presented to the public at the European Medical Week Congress in Baden-Baden (Oct. 29-Nov. 3, 2010) for the first time. It is aimed at the microscope market currently using darkfield microscopes, etc.
Kurt Olbrich retired in 2014, at the age of 80 due to failing health and passed on January 5, 2022. Grayfield Optical negotiated with his engineer Manfred Buks to continue sales and marketing of the microscopes into the future. It was decided to redesign them using a modular system enabling customers to start small and expand up to the top model. Development took until March 2020, but the pandemic halted release as major suppliers closed their doors. Finances dried up while new suppliers were investigated and found.
With the help of new investors, it is planned to restart manufacturing and marketing on a larger scale during 2022 with a planned release in Q3 2022.
|